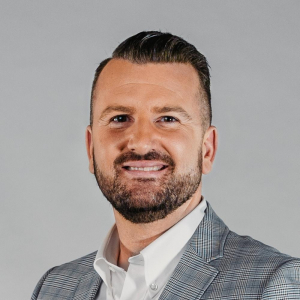 Joël Spinks is the founding pastor of Victory Church (Église de la Victoire du Québec), founded in 2008, with members in 60 nations. He is the president of Franco-Mission Internationale, the humanitarian arm of this same church. FMI Congo has an orphanage as well as a home for widows in Butembo, Congo, while FMI Cuba alleviates poverty through its feeding program. He serves
apostolically in the Canadian based church as well as in Belgium. He is the author of “Understanding Divine Healing”, “The Victorious Disciple” (French), “Jesus Revealed: The Gospel of John Explained” (French), “Prophetic Light” (French), “You Are Richly Blessed” (French) as well as “The Spinks Study Bible” (available electronically and in French). Additionally, Pastor Joel founded Integrity Victory College, a Bible institute founded in 2016, with a campus in the Congo (RDC) as well as in Haiti.

Originally from Quebec, Pastor Joël grew up in a Christian home and made his profession of faith around the age of 4. He spent his youth involved in his local church, where he began teaching “Sunday School” from the age of 12 until he was 18. He also traveled as a Southern Gospel soloist at Christian events during that same time. In 1999, he recorded a debut album called “Let Him be your
Refuge” which enabled him to travel in Canada and the United States for four and a half years. Pastor Joël has ministered in North America, the West Indies, Europe, Africa and in Australia.

In 2003, he was invited to be a guest on « Lifeline », produced at that time by the Miracle Channel based out of Lethbridge, Alberta. Immediately after the recording of this first program, he and his family were invited to join that national media team. The « Lifeline » program was aired on the Miracle Channel (Canada), Crossroads TV (Canada), Vision TV (Canada), NRB Channel (United States) and
the Australian Christian Channel (Australia).

It was in September of 2003 that the Spinks family left Quebec to relocate to Alberta. For four years, Pastor Joël served as an associate pastor at the Miracle Channel church. He also taught leadership classes at the Miracle Channel School of TV Ministry. In addition, he hosted the bilingual « Seeds of Faith » daily devotional as well as contributed to the « Lifeline » television program, until his return to
eastern Canada in September of 2007. Pastor Joël then appeared on « From the River » (broadcasted on the Miracle Channel, CTS, Vision TV and Cornerstone TV – USA). Following some ministerial trips in the Canadian Arctic, he then returned with his family to Quebec to establish Victory Church in September of 2008. It was in Quebec, at « Ministère Enseignemoi », that he resumed his television ministry, hosting « Vie de Foi » (Life of Faith) from 2015-2020. Since 2020, he currently hosts the weekly « LIVE de Guérison » (Healing LIVE program), as well as « Parole de Foi » (The Joël Spinks FAITH Broadcast – in French and in English), all programs produced by Victory Church.

Pastor Joël Spinks obtained a ministerial license in 2002, and was then ordained in 2003. It was in October 2015, that he was welcomed into the ministerial fellowship of ACER churches (Christian Assembly for Evangelism and Revival, members of the CEAF and the Protestant Federation of France.) Pastor Joël holds a « Bachelor of Theology » from the Saint Paul’s Bible Institute (New York, NY, USA).

Pastor Joël and his wife Mathilde are the parents of Flora-Mae and Félicité. The Spinks family resides in Bromont, Quebec, Canada.